PPS Kanudadaji’s Sutra of the Day (45)

Please share your day-to-day experiences with us regarding this quote. How do you overcome circumstances with equanimity? What type of understanding is necessary to do this?

Stay tuned with for the next live satsang with PPS Kanudadaji!!

Even before meeting Dadaji he was kind, noble  and generous in his social or professional living. Many  people have received some or other help from him including financial help. Even swami Jaymeshanandji had same experience when he had approached  Shri G.A. Shah for  joinning his english coaching class as a student of 10 th grade  and upon requesting to allow him pay class fees in 4 installments, Shah saheb had readily accepted it without knowing him before.

After seeing Dadaji It all flourished with Gnan.

Shri  shah saheb was entrusted responsibility as Sakal  sanghpati  in 1997.So he served over 12 years  as sakal sanghpati.

He had lot of contributions including English translation of Aptavani 1 and Obeisance book. He was instrumental in translation. Compilation and editing of many sangh publications including invitation cards for various occasions of  sangh celebrations  or documentray DVD for Jai sachidanand sangh.

Shah saheb used to come for darshan of Dadaji  from Amdavad to Vadodara even late at night as he used to be busy with his famous  ‘G.A. Shah – English classes ‘ and Dadaji used to sit till shah saheb comes even at 10 /10.30 Night.

Dadaji  in later years ( from 1984) always  stayed  at Shah saheb’s  place when  He used to be at Amdavad for satsangs. His house used to remain full with aptaputras and all  mahatmas .

Shah Saheb always used to tell only one thing ” I don’t know anything else but I would only like to please Dadaji. He only looked for Dada’s  ‘Rajipo ‘. And Dadaji also on other occasions have clarified that Gnani’s  Rajipo collectively results into Krupa. Rajipo is like cents and Krupa like a dollar.

His devotion and service were full ,  not only by mind, body ,speech  but  wealth or money too. To be able to serve sangh  in a better way he also closed down his booming classes.

He always used to say that I am ‘tar vagarno  tamborro ‘of Dadaji.

Dadaji had spoken a lot about him. Dadaji  also  used to say he is  ” TAR VAGARNO TAMBORRO “ .It means his discharge egoism was also at minimum .Dadaji   said , ” since his discharge egoism is at very low, he would not have adverse effect or reaction even if he is insulted or humiliated.”

Since  his discharge egoism was at very low, he was given permission and even asked to do satsangs by Dadaji.

Dadaji had not only blessed him but also had entrusted him all future responsibilities about sangh.  Shri Vasantbhai was told by dadaji, ” you may ask shah saheb for any relative problem or difficulty of J.S.Sangh . So Shah saheb had to take over as Sakal sanghpati in   1997 .

He had such a tender heart and sober personality   that he could never hurt anyone, nor speak any harsh word to anyone even if he was asked or required to do so. Infect   he   accepted all poisons  from different people in various forms as   adverse comments, complains ,quarrels or hurting words with perfect state of  Gnan .

He had only one thing at heart,  ” Let this Dada’s sangh remain  one with love  that is to say  remain  united . At times he used to become sad in relative part seeing some adverse occurring   or play of personalities. But he was always seen trying to meet everyone, trying to love all mahatmas and trying to keep all as   one .

Even when his body strength was on decline in last couple of years, his heart and mind were as enthusiastic and energetic and   till end he kept on working for Sangh.

Kanudadaji  rightly says that he was best example of  ‘Laghubahv‘ and ‘Abhed drashti’ for all of us.

We all pray Simandhar swami and  Dadabhagwan to   shower blessings on him such that his link to Simandhar swami remain uninterrupted and   his way to liberation remains free of any obstruction.

We are also sure that he is at very high position and would be helping this cause of Jagatkalyan from where ever he is .
Jai Satchitanand, 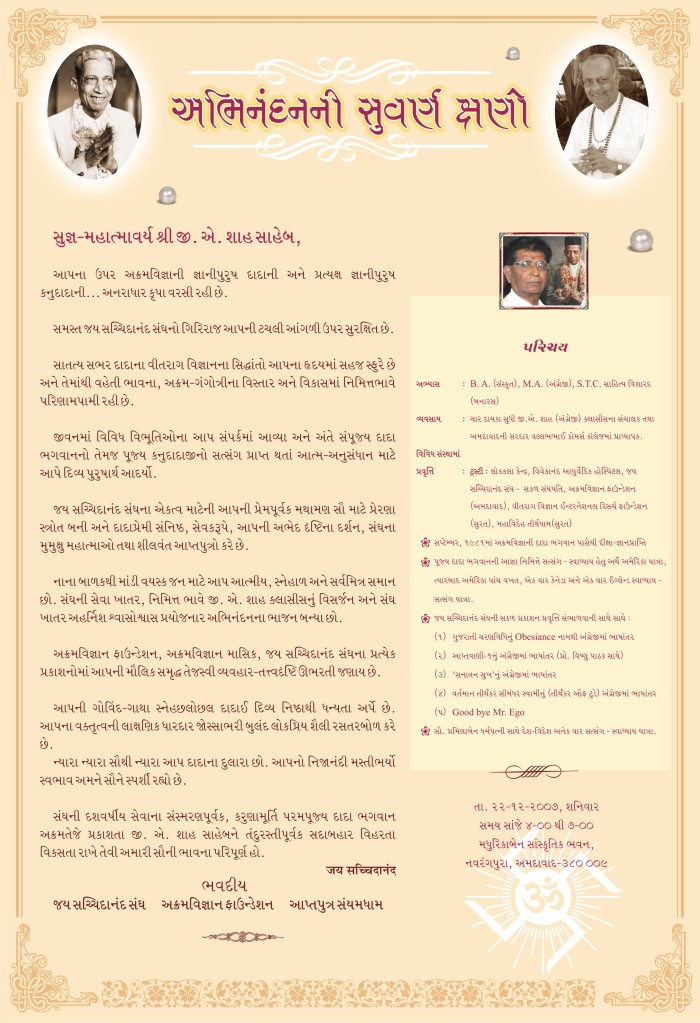 PPS Kanudadaji’s Sutra of the Day (44)

There is external happiness in the ‘Self’ but never in externals. Such natural happiness is that of the ‘True Self’ only.

Stay tuned with for the next live satsang with PPS Kanudadaji!!

Filed under: Announcements — jssyouth @ 9:34 am

With heavy heart we want to convey every mahatma of Jai Sachchidanand Sangh in India and the world over that we have lost our overall President [Sakal Sanghpati] Shri GA Shah Saheb on October 21, 2010. He was suffering from secondary level of jaundice. He was 76.

Here is the Blessings and Tribute to Shri GA Shah Saheb from Param Pujya Shree Kanudadaji on the day of the funeral at the Parshwanath Chanbers Satsang Hall. Please listen to the audio file attached. Also see the Photographs attached…

We request and appeal all the mahatmas worldover whosoever had come in contact with Shri GA Shah Saheb and whatever you have learnt from him, please send your experience with him as a greatest tribute to his hard and dedicated work from the day he met Dada Bhagwan in 1983.

Please forward this mail to other mahatmas you know…

Please send your experience in one week time!! 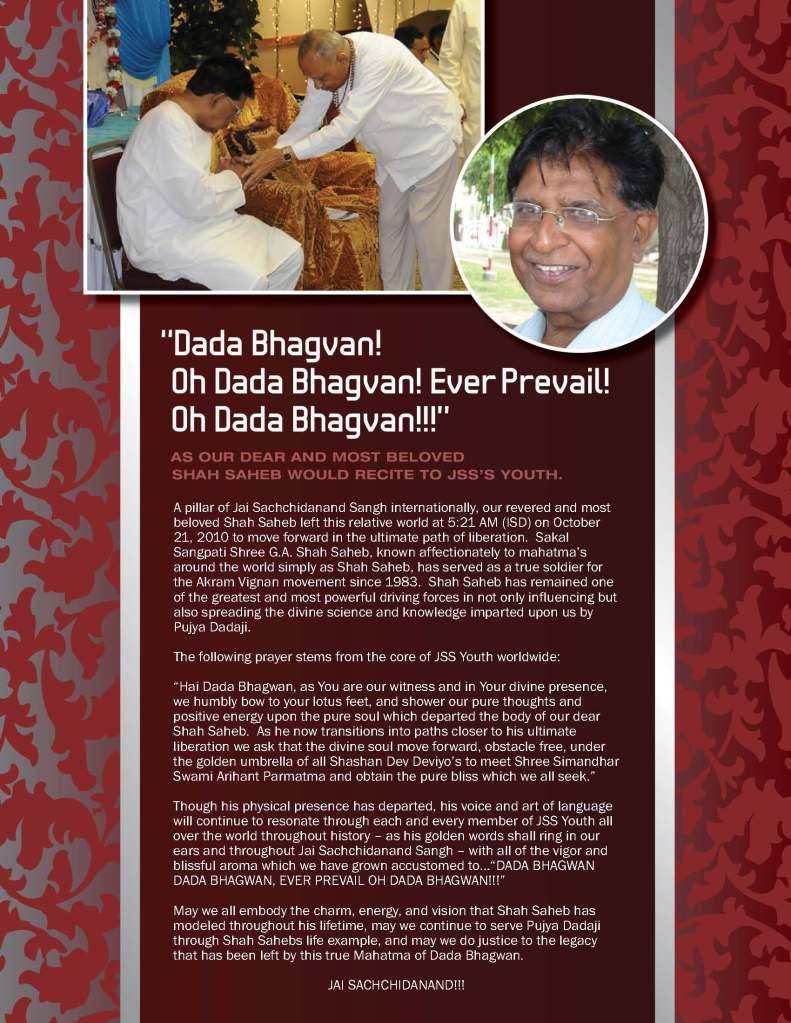 Once it is realized that there is endless happiness within, the quest for happiness from externals will cease.

Please share your day-to-day experiences with us regarding this quote. How do you find happiness within? What is happiness from within?

Also, stay tuned with us for the next live satsang with PPS Kanudadaji!!

Next Page »
Jssyouth's Blog
Create a free website or blog at WordPress.com.